The other day, my five-year old asked if he could try Chinese Food.  So of course I said yes, and then I began scouring the internet for recipes for vegan wontons.  Even though it was already 5:30 pm, I seized the moment, and, to my great amazement, threw together some delicious vegan wontons.  I used this recipe for the wonton wrappers.  I used the dough hook attachment on my standing mixer, and I added some extra water and flour until I obtained the right consistency.  Much like the author of the recipe, I enlisted my husband to help me roll out the dough.

For the filling, I found this recipe.  Based on what I had in the fridge, I used baby spinach as my greens, and chopped baby bella mushrooms for the filling.  I also omitted the sesame oil, chile oil, and cilantro, based on my audience.  I substituted rice vinegar for the rice wine/sherry given what I had in my pantry.  Because I didn’t make the sauce at the end, I added the garlic into my filling.  Next time, I will put all of the ingredients for the filling into the Cuisinart instead of chopping it by hand.  I also used extra filling as a garnish for the wontons to serve them.

The result was delicious steamed wontons — the ginger and garlic and scallions make them quite fragrant.  I even had white pepper on hand.  I cooked half as soon as I made them, and I wrapped the other half up and made them the next day.  They were delicious!  I generated about 16 wontons from this recipe.  They were all a bit misshapen, but the filling stayed put inside, and the dough was delicious once cooked. 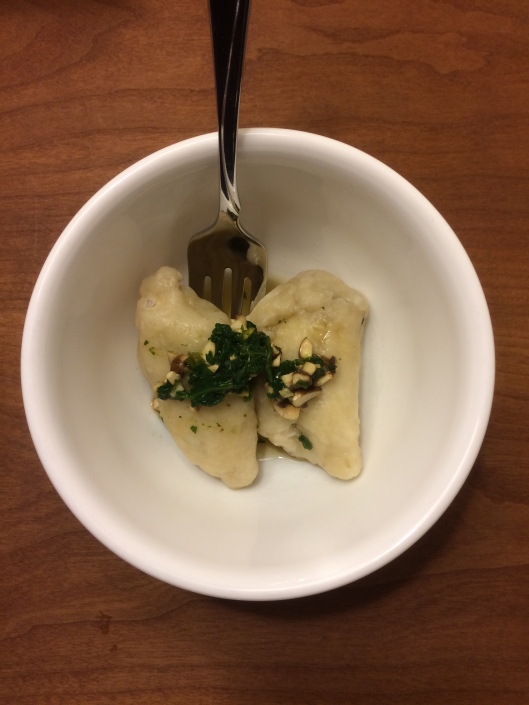 Thus, I had a first course.  Then, I decided to make Chinese-style chicken, which is based on many of the same ingredients as the wonton filler.  Here’s what I came up with.  It was a crowd-pleaser, and my children actually ate brown  rice with it!  Bon appetit!

1 yellow onion, sliced thinly and cut in half

1 carrot, made it ribbons

1/2 cup of raw, unsalted almonds (skip these for nut allergies)

In medium-sized metal bowl, whisk together all ingredients for sauce.  In large braising pan, over medium heat, saute onions in olive oil with some sea salt.  When those have cooked down, add almonds and cook until lightly toasted.  Add red peppers and mushrooms, and saute until cooked.  Add chicken breasts, and sear both sides.  Add extra canola or olive oil as needed so that mixture doesn’t burn.  Add sauce and coat chicken.  Cover and let cook for about 10 minutes.  When chicken breasts are almost cooked through, add carrot ribbons, celery and snap peas on top of the chicken breasts.  Cover and cook for another 5 minutes, or until chicken cooked through.  Serve with brown rice.  Putting some of the cooked sauce into dipping bowls makes it extra fun for the toddler/preschool set!  Enjoy!